A top upper body priority muscle to strengthen in a dressage rider is the bicep. The upper body has stuff to deal with like contact and suppleness. None of which can compromise the riders balance in their seat. In order for this to happen, the bicep muscle must be activated without other muscle groups coming in and messing stuff up.

The bicep which is really two muscles together creating the arm curling motion. This is a very useful tool when doing lateral movements in an arena. The inside arm should curl upward, never pushing elbow behind the frontal plane (aligned from the shoulder down). This is isolated muscle activation. This must be free to do in any lateral movement on the inside arm. If you can’t, something is stuck on the inside seat which can lead to major problems.

A weak bicep muscle can fail while riding and other muscles have to come in and do the job instead. This can be a big problem because what if that muscle is suppose to operate for you riding position. Every muscle has a job to do and if you overload an area with too much responsibility it will over develop. Over time this will lead to core stability imbalances.  The most typical position mistake due to weak biceps is that the shoulder will round forward.

A rider can lose their inside seat or the rider might fall forward instead of sitting up with no isolated muscle control.  As muscles strengthen, they help a rider connect to their reins and core more trustworthy. 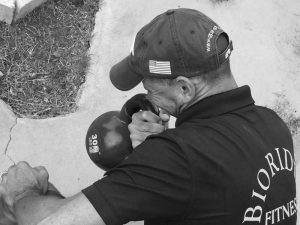 In workouts, use full range of motion in the exercises to gain control over your ability to isolate to a short range of muscle control for the inside contact.

Leg Positioning and Activation for Dressage